Member parties of the Arab Social Democratic Forum (ASDF) received with great satisfaction the news of the Palestinian national reconciliation between Fatah and Hamas movements, the immediate commencement of the Cairo and Doha Agreements, and the formation of a national reconciliation government by President Mahmoud Abbas in the next five weeks.

More steps to conduct presidential and legislative elections, the election of the Palestinian National Council and the activation the PLO’s role before the end of this year will follow this.

The ASDF views this deal and the earlier accession of the State of Palestine to a number of conventions and international organizations as an expression of the Palestinian right to complete the necessary steps to establish a Palestinian state with Jerusalem as its capital on Palestinian land.

It is an important milestone, in the right direction, to build a unified Palestinian front in the face of the occupying forces to counteract the apartheid regime, racial segregation, annexation of the occupied Jerusalem, Judaization / de-Arabization of Jerusalem, illegal settlement activities, the blockade of Gaza, turning the West Bank into cantons and isolated islands, the confiscation of Palestinian funds, not complying with the release of prisoners agreement, un-recognition of the right of return of the Palestinians to their homeland, and denying the Palestinian people their natural right to self-determination and to build their independent national state with full sovereignty with Jerusalem as its capital.

As and Forum affirms the right of the Palestinian people and calls for the completion of accession and the signing of all the agreements, treaties and international organizations, particularly the International Criminal Court, it calls on the U.S. administration to respect the national decision and the Palestinian democratic process.

The Forum calls on the European Union and the Socialist International to support the Palestinian agreement and support the national reconciliation government. It also calls on the European Union to take the initiative to assist in constructing a new regional strategy based on enabling the Palestinian people to have the right of self-determination and to build their independent state with Jerusalem as its capital and implement the relevant legitimate international resolutions, especially resolution 194; especially since Israel's membership in the United Nations is conditioned by the consent of the implementation of resolution 194.

We also calls on the Arab League and all Arab governments, movements, parties and peoples to stand in solidarity with the Palestinian leaders to achieve reconciliation and from a national unity government headed by President Mahmoud Abbas.

The member parties of the Arab Social Democratic Forum (ASDF), hosted by the Fatah movement and the Jordanian Social Democratic Party and supported by the Global Progressive Forum, consisting of the Progressive Alliance of Socialists and Democrats in the European Parliament and the Party of European Socialists, together with SOLIDAR and the Foundation for European Progressive Studies (FEPS), held their third meeting in Amman – The Jerusalem Conference on March 25, 2014 in accordance with the Rabat declaration of June 25, 2013.

We are proud of the senior representation of both the member parties and the European parties and organisations. The Jerusalem conference marks another important milestone on our way of reaching our goal in building a unified Arab social democratic front that will encourage partnership, coordination, the exchange of ideas and resources between the social democratic parties of the Arab world on one hand and, on the other hand, establishing effective means of communication and partnership with our international counter parts of the social democratic family.

We valued the mutual participation of the member parties of the ASDF and their European sister parties and organisations on both days of the conference; the plenaries and the debates helped achieving the goal of the conference in developing a “Common vision for a progressive Arab world”. In the framework of the ASDF activity, both the ASDF women wing and the youth wing (IUSY) convened to establish their own future activities.

The ASDF adopted the Jerusalem Declaration, in which the council decided to form a special committee of its member parties to follow up on the resolution and to implement activities against the Israeli illegal actions and to consolidate the status of Jerusalem as the capital of Palestine.

Download PDF
Feb 03, 2014 A statement of solidarity with Idriss Lashkar

The Arab Social Democratic Forum, based on its modern progressive values would like to express its full solidarity with the Secretary General of the USFP against the smear campaign and the hate speech that clearly violates freedom of expression and threatens the basics of peaceful coexistence between different factions.

The Arab Social Democratic Forum (ASDF) expresses its deep concern regarding the political developments in Egypt. The escalation of violence is unprecedented; we urge all the parties to act with utmost self-restraint. Peaceful freedom of expression should be guaranteed to everyone and the security forces must abide by international standards...

The Arab Social Democratic Forum warns against a military intervention in Syria. We strongly condemn the use of chemical weapons and stress that its use by any party in Syria is a crime against humanity. We applaud the Socialist International call on the UN to quickly confirm the use of chemical weapons, identify an international response and move to hold those responsible accountable. A U.S. military intervention as is currently under consideration by the U.S. Congress, without the UN Security Council authorization, is a violtion of the United Nations’ Charter and poses a grave threat to regional stability.

The Arab Social Democratic Forum (ASDF) praises the call of Mr. Idris Lashkar, the Secretary General of the Socialist Union of Popular Forces (USFP) - Morocco, on the democratic forces to inaugurate a broad democratic front to defend the gains of the Moroccan people and to be able to face the wave of apostasy by the current government led by Islamists Justice and Development Party. 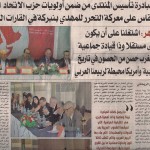 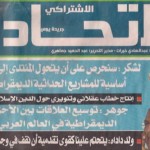 "On the eve of the second anniversary of the Arab Spring, the message of our progressive conference could not be more significant: it is time to put hope into action." Dr. Hussein Gohar of the ESDP writes in the Daily News: Read entire article